Christmas is all about traditions: carols, decorations and food. It’s also about brands jumping on the Christmas bandwagon, trying to associate their offering with the joy that the holidays bring. In a world saturated by these festive efforts, just how do you integrate the holidays into your campaigns in a way that your audience won’t instantly dismiss as an empty corporate ploy?

Well, the best way, as is often the case, is to get in touch with your creative side.

We’ve gathered some of our favourite branded holiday campaigns, along with what we think makes them especially interesting. Whether it’s a stunningly simple concept or an example of bold, disruptive thinking, they all have something to teach us about harnessing a little of that yuletide marketing magic.

When a Brand Becomes Christmas

Christmas television ads have been part of the fabric of the holidays for decades. Some were so wildly successful, in fact, that they have become an iconic and inseparable part of the Christmas experience.

The holy grail of Christmas advertising has to be what Coca-Cola has achieved. Coke has an almost century-long relationship with Christmas. They’re given credit for popularizing the image of Santa as a jolly round man back in the 1930s (though, contrary to popular belief, they weren’t the first to portray him as wearing red). Considering how ubiquitous (very) this idea of old Saint Nick has become, that’s a remarkable accomplishment.

A more recent phenomenon has solidified Coca-Cola’s place in Christmas lore. In 1995, the agency W.B. Doner had the idea of centring coke’s Christmas branding on a fleet of massive red trucks, fully decked out for the season. Coke built on the concept over the next few years with more ads and, since 2001, have brought the campaign to life with fleets of the Christmas trucks that tour various countries close to Christmas time. The sight of those red trucks and the bouncy soundtrack promising that ‘holidays are coming’ is now a herald of the Christmas season for many people, something which coke capitalized on in this clever Twitter campaign in 2016.

Christmas officially starts when the @CocaCola_GB #HolidaysAreComing ad is on TV. RT to set a reminder & avoid FOMO pic.twitter.com/QZDDRMLSCR

How many of us are planning campaigns that will be around in 30 years, let alone a century? Maybe they might be if we consider how the big idea could appeal to the longing for tradition that lies at the heart of the season (perhaps we can change Christmas forever…next year).

The Storytelling Side of Christmas

Storytelling is a crucial part of the whole Christmas experience. From mangers to ornaments, colors to snowmen, grinches to reindeers, it’s a holiday steeped in lore. Simply consider the wealth of Santa Claus adjacent myths from all over the world. Whether it’s the jolly bearded man  from the North Pole, Italy’s broomstick riding Christmas Witch or the Yule Lads who visit Icelandic households, these are all rich legends which have been refined over generations.

Storytelling is essential to creating  a campaign that will stand the test of time. A brand that has fully embraced Christmas storytelling is the British department store chain, John Lewis. Since 2009 (with their London agency adam&eveDDB), they’ve opted for heart-warming stories set to emotive soundtracks. From a snowman’s quest to find the perfect gift to the struggles of an excitable baby dragon, the only real sign that they’re advertising something is occasional product placement. The ads are a cultural phenomenon in the UK (with each one garnering millions of views on YouTube) and each year sees weeks of online speculation about the theme and in particular who will provide the soundtrack.

An editorial from the Chartered Institute of Marketing puts the success of the John Lewis ads down to the fact that they aren’t trying to behave like ads: “when these ads do not appear to be advertisements selling product, we let our guard down, and our subconscious takes over, picking up on the subtle cues, the emotional messaging, the music, making connections between these to form an overall impression”. In an age of content marketing where many brands seek to build relationships by entertaining and helping their audience, this doesn’t seem nearly as out there as it might once have done. While sentimental stories about lovesick penguins won’t work for every brand, viewing your Christmas efforts through an emotional storytelling lens could be a hugely valuable approach.

Tweaking designs for Christmas is a concept that many companies experiment with. Google famously changes its logo to celebrate the holidays, with other brands like Twitter, Gumtree and H&M having done likewise in the past. When well-executed, a festive design change can create a real anticipatory buzz. Of course, messing with your branding for an empty gimmick can easily be counterproductive, so it’s important that it forms part of a wider campaign and/or truly serves your brand’s values in some way.

Starbucks’ approach of offering new seasonal cups every year is a standout example of how a Christmas design can enhance a campaign. These began in 1997 and each year has brought a brand-new design, released to celebrate the launch of their festive menu. For proof of how eagerly people look forward to the release each year, you need only look at the backlash after a limited-edition reusable version sold out within 2 hours in 2018.

Another example – and perhaps one of the most enduring instances – are the festive stamps  released by many postal services from around the world. Good old snail mail has been at the heart of Christmas for centuries, whether it’s a card to an old friend, a thank you note to Grandma or that all-important letter to Santa. Festive stamps enable people to bring a little Christmas cheer to plain envelopes and are also a subtle celebration of the crucial role still played by postal services during the holidays. Of course, they also have immense appeal for collectors too.

Festive stamps, the Starbucks cup and Google’s logo tweaks are strong examples of how a festive design can make people feel positively towards a particular product or brand. It’s an approach that taps into people’s love of recurring Christmas traditions while simultaneously giving them something new to look forward to every year.

Whether it’s meeting Santa at a department store, a unique approach to carolling or an unexpected gift, helping people create memories is an immensely powerful way to improve brand perception.

One of the most venerable examples of this is the Christmas window display. This gained traction thanks to the spread of gaslights and plate glass during the 1800s. Soon, major department stores such as Fortnum & Mason of London and Macy’s of New York realized that their philosophy of offering a spectacle inside their stores could be taken outside too. These started off as fabulous displays of merchandise, such as the tableaux Macy’s created way back in 1874, using the porcelain dolls for sale in their toy department. In 1938, Lord & Taylor ushered in a new age when they created a window display of swinging bells, rather than products. Since then, brands have built on escapism and fantasy, with elaborate scenes and striking uses of technology (such as animatronics). While the displays are still intended to entice people into the stores, going out to view them has become a fabulous (and free) Christmas experience for children and adults alike.

The gift-giving aspect of Christmas also gives brands an excellent way to create an experience-based campaign. The Canadian Airline WestJet created an award-winning spin on the simple give-away in 2013. Before passengers boarded a flight, staff asked them what gifts they’d love to receive for Christmas. When the passengers arrived at their destination, they found those gifts wrapped and waiting for them on the luggage carousel. While this stunt may have only involved a limited number of passengers, it reached millions of people via a hugely viral video. Anyone who watched the video would be hard-pressed not to be touched by the brand’s generosity and sense of whimsy.

It’s easy to focus on the fact that people can be cynical during the festive period due to the barrage of Christmas advertising. However, the longevity of Christmas window displays and the viral appeal of West Jet’s video suggests that there’s still a huge amount of value in appealing to that sense of wonder with unique experiences.

These days, a huge amount of a company’s Christmas marketing likely happens in the digital space. We’ve come a long way from the very first E-cards back in 1994. Now we are all creating terabytes of gifs, landing pages and, yes, 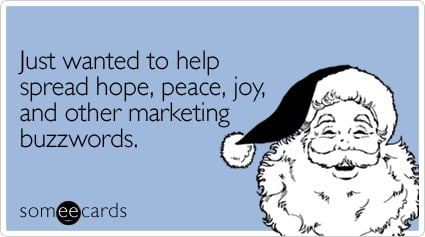 Christmas blog posts. Those that really stand out are the ones who have created offerings that play to the true strengths of the medium.

One of the most famous of these is Google’s Santa Tracker. Inspired by a service that has been offered by NORAD since the 1950s, Google realized that they could use their fledgling map technology to show Santa’s progress across the world. As Google’s products improved, so did the experience and soon people could view digital models of Santa’s sleigh and workshop. It is now a full-fledged digital event with mini-games and a vastly expanded content offering. This project is valuable for many reasons: as well as the emotional enhancement of the brand’s image, it allows Google to show off their expertise and new advancements in a way that people can easily relate to. As Hubspot put it: “it combines the holiday wonder of a belief in Santa with real-life technology.”

Another aspect of Christmas (and perhaps December as a whole) is the opportunity to look back at the year and reflect. The Economist gave a masterclass in content repurposing with their Daily Chart Advent Calendars: an advent calendar which featured its most popular maps, visualizations and infographics for the year. Combining the festive preoccupation with countdowns and people’s love of looking back made for a clever and practical Christmas effort.

Both of these examples hinge on brand’s showcasing what they do best in new and more light-hearted ways. Christmas campaigns give you  the licence to be more playful and creative than usual and the Internet offers the perfect arena for it.

The True Branded Magic of Christmas

There is no recipe for the perfect piece of Christmas advertising or branding. However, if the examples above prove anything, it’s that Christmas is a great opportunity to exercise your sense of fun and creativity. By being open minded and focusing on the things that make Christmas special to your audience, you may well find the means to represent your brand in a way that will strike a festive chord with the people you want to reach.